To be a successful company in a global economy, you’ve got to go “Glocal.” With a nod to Thomas Friedman, the world may be flat…but that doesn’t mean it’s all the same. Au contraire. With the advent of social media and mobile technology, never has content been more easily shared, nor has it required more nuance.

What does Glocal mean?

Glocal is a way of thinking about content that allows for consistency with flavor – it means that global content can be leveraged yet tailored to a local audience. How do we do that? Language AND context.

For example, you wouldn’t sell pizza in New York in the exact same way you’d sell it in San Francisco. You would make the New York version cheaper with attitude, and the San Francisco version would have a selection of local organic toppings. Moving from one country to another makes things even more complicated. Now you need to explain what pizza is and why it is the perfect meal -— and you’ve got to do that in the right language.

This isn’t a new problem for business; in the 80s we coined a term (we didn’t have “mash-ups” so we coined in those days) “Glocal” to express the concept of a global product entering a local market. Sociologist Roland Robertson popularized the term in the late 1990s, when companies began to realize that going global was the key to growth. The cautionary tales – Nova, Pepsi, etc. – served to remind everyone that global is one thing, and local is another; to be successful, a company must do both. Back then, however, the task focused on the translation dimension, and rendered inconsistent copy, expensive and time-consuming resources and lacked a cohesive work flow. For many, it still does.

Glocal in the 21st Century

Once again, technology is allowing for disruption, not by new ideas per se, but by facilitating the connectivity between different people and systems. Now, it is not enough to simply translate words and save to a hard drive. A 21st century Glocal solution must have at least four elements:
1. Cloud-based
2. Understands (and learns!) context
3. Allows for local expertise to weigh in within a streamlined process
4. Integrates directly with all of the leading marketing and content systems.

Globalization by broadcast is so yesterday — people aren’t just going to connect with or trust a brand that doesn’t seek to know them. By literally speaking the language of the consumer – at scale - the best brands are global in scale, local in delivery and Glocal in execution.

“Inspiration in the Nation” was Marketo’s theme for the 2015 Summit, and wow,...

Less than 25% of your potential market can read this sentence! Don’t let your... 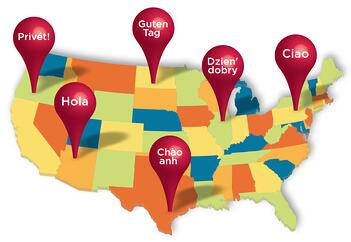 The Local Glocal: The Market Next Door

It’s easy to understand the value of marketing to your global customers in...